It’s a great joy to be here. Thank you for the kindness of Hans-Thies Lehmann and Akademie der Künste. My speech will be, in part, about the Brazilian reception of the Post-Dramatic Theater, and in part, about my personal relationship with the book. This may be of interest because I was responsible for writing the preface to the Brazilian translation, published in 2007. And it is a contradictory and critical preface to a brilliant book, which I myself indicated for publication.

There are reasons for this contradictory relationship. I belong to a group of artists who have an interest in the research of a representative political theater, something that can be associated with the Schiller-Buchner-Brecht-1968 tradition criticized by Lehmann in his last chapter: the tradition of socially engaged drama.

On the other hand, our group, the Companhia do Latão, also makes use of post-dramatic procedures described by Lehmann, according to specific artistic interests.

Thus, the entry of Lehmann’s work into Brazil 12 years ago was mediated by a contradictory presentation, but which had the merit (today I can say) of predicting some of the misunderstandings that theory can generate when read superficially and without historical framework.

My first contact with Lehmann’s thought took place in 2001, when I invited him to a cycle of conferences on the theater and the city that took place in São Paulo. I knew about his first studies on Brecht with Peter Szondi, and that was the reason for my invitation.

He could not go because of the attack on the twin towers, but we found ourselves in a very special situation two years later, on the occasion of a course on Heiner Muller. It was a closed meeting, made by him, and mediated by Uta Atzpodien, for some young artists.

I would like to highlight from this episode the patience and vivacity with which Lehmann faced each one of our critical comments about Müller’s work. Our position was unusual, that of people who admired Muller’s poetic work, but who did not consider it a dramaturgy that was really critical, given the conditions in Brazil.  Some of us went so far as to consider it conservative, because there was a kind of “relishing the contradiction” in the plays.

I would like to explain the reasons for this perhaps unfair view.

Almost all of us from that group went to university at the end of the 1980s. It was a time when the schools of performing arts developed a lot in Brazil and adopted as a central reference, very early on, the post-modern aesthetic standard, with a force that continously increased from there to here.

Contrary to Europe, this experimental movement did not come as a reaction to a heavy dramatic tradition, much less against the excesses of a “brechtian” leftism. In Brazil, the postmodern pattern radiated as an outside-in movement, as an a-critical import of innovation.

It is a country of long past slavery and fragile middle class life. There is no regular tradition of public theater in Brazil, and drama has only become institutionalized on television as melodrama. Inter-subjective dialogue will always sound false in a country where the waste of the other is the structural basis of relations.

Incredible as it may seem, the first successful attempt to produce a national scene of a dramatic type took place in the 1950s, with the generation of political theater of which Augusto Boal was a member. But this attempt was also interrupted by the military coup of 1964, which led so many people from leftist theater to death, exile or the need for survival in the cultural industry.

Boal himself created his own Theatre of the Oppressed outside Brazil as an international technique, and only returned to the country at the end of the dictatorship, which lasted 20 years.

It is in this generational vacuum that the new wave of cultural imports of the 1980s takes place: after the counter-cultural theatriCAlity of the 1970s, the radical neo-staticism of the young plastic artists, imitators of Bob Wilson, and also the performative practices centered on corporality, which are still influential today.

As the dramatic tradition was precarious, there was no middle ground: theater was divided between commercial productions, consumer genres, and experimentalism linked to universities, spaces where the rare public cultural life takes place. Many good and bad things began to be done in the name of these trends.

With the growth of international festivals, this movement expanded, and a certain ideOlogy of the “contemporary in art,” associated with the various poetics of “presence” became a strong currency.

The feeling of exile, recurrent in the artist of a perIpheral country, facilitated the election: social isolation was now a gesture of artistic refusal, and many believed that they could combat national misery by fleeing into the soul or affirming the body.

I tell this story because, in a certain way, something happened in Brazil that happened later in Europe: a certain institutionalization of post-dramatic theater, a normalization of disruptive gestures.

It was by chance that my dear Professor Lehmann found precisely the dissonant voices, a group of dissatisfied with commercialism and self-referential research: we were very early critics of postmodernism and its variants, not because of nostalgia for the unrealized drama, but because of distrust of the recurrent imports – which have no basis in the social and cultural experience of the country.

In addition, Heiner Muller’s Brazilian staging in the 1990s was mostly a technical exercise. Against this opinion, Professor Lehmann asked us to read the plays again in a concrete way and thinking about their relationship with Brazil. He analyzed The Mission and Hamlet-machine, word for word.

It showed that Muller’s historicity was printed on the form, it was fundamental of the poetic structure of each sentence. And it stimulated us to perform a staging based on Muller’s interviews: Collected Misconceptions, which was very important for our trajectory.

My preface to the Brazilian edition of The Post-Dramatic Theater was written, thus, as an attempt to thank – THIS GREAT PROFESSOR, ONE OF THE BEST I’ve ever had IN MY LIFE – and also to historicize. My intention was to avoid the simplifications and misunderstandings that were already spreading since the “post-dramatic” formula started to circulate, even before the book. In a context of a culture of reproduction, I tried to prevent the work from being read as a legitimation – in abstract – of any scene of deconstruction, of any performative fragmentation.

He tried to avoid it being considered an a priori statement of appreciation of any non-logocentric experience. Or even, a stimulus to the negation of the word, to the abandonment of its literary dimension or even of meaning.

I tried to emphasize the presence of Adorno in his thought, a countertrend in relation to the post-structuralist bibliography. The aesthetic emptying that Lehmann recognizes in a certain post-dramatic theater, with a negative dimension, balanced the poetic positivity of the desired or dreamlike landscapes.

I tried to emphasize the dialectic vision underlying his work, of szondian inspiration, visible when he says that “artistic forms are coagIUlated patterns of collective experiences”. I tried to point out these tensions, and torelativize a certain Artaudianism or search for phenomenal “authenticity” of the theater.

I even said as a consequence of a perhaps exaggerated effort that Lehmann’s book was born out of the desire to explain the phrase: “Bob Wilson is the most legitimate of Brecht’s heirs,” said by Heiner Muller.

To this day, these seem to me to be the most beautiful analyses made by Lehman, when he describes Bob Wilson’s theater as a “resistance against the atomazition and social fragmentation of time”. It is in this association of the post-dramatic to the spectral scenes and the poetics of death – these alegories of paralyzed social time – that his work connects past and future.

The comparison with Brecht thus makes sense: the best post-dramatic theater also operates through activations, through gestures that contain refusals and radical absences. “Beautiful is something that gives the senses the opportunity to prove themselves capable,” says a phrase from our play A compra do latão THE BRASS PURCHASE.

About the most controversial part of Lehmann’s book, his final chapter, I tried not to position myself in my preface.

Even today I think that the orientation of the work towards a “politics of perception” suggests a hidden teleology and it is the most polemic point of the whole. It is a chapter that has the problems of every system: true in what it affirms (the aesthetics of risk and responsibility is a beautiful proposition), but false in what it denies (the other current possibilities of political theater).

A true artist cannot ignore that the “truly political dimension of theater consists not that much in picking out the issues as central themes, but first of all in the situation, in the relationship, in the social movement that theater as such is able to constitute,” as Lehmann says. However, as Adorno observed, it is necessary to understand the substance of this displacement, of this situation. And many times, as in Brecht’s case, this comes from engagement itself.

It is evident that my attempts to explore the historical background of Lehmann’s work have not had much effect. They displeased ideological readers, to the right and left of the author.

But I believe that its brilliant potential – which makes it the last of the great theatrical theories of the twentieth century – is connected to a living feeling of time.

In fact, a poetics of minimal deviations, exceptions, and sequences makes sense in situations of social immobility, and they gain strength in friction with the oppressive charge of dramatic traditions that have become institutional. These are moments in a scene that tends to be lyrical and will always have to deal with radical subjective crises.

The new fact, however, is that we are no longer in times of social immobility. The streets are taken in Chile and Bolivia and in various places in Latin America. And in Brazil, the sordid ultra-right elected government no longer hides that it came to liquidate the rights of labor, which forces it to associate with militias and capitalist churches, and also to fight the arts, in a messianic crusade against what they call “cultural Marxism”.

Faced with this, the theatre will not be able to feed any more illusions as to its class, its social place. And its radicality is once again linked to its capacity to dismantle its own institutional or mercantile situation, in order to actually express, at least symbolically, a free human activity.

I believe that Post-Dramatic Theatre was written with this perspective. In the first meeting we had with Lehmann, when the course on Heiner Muller began, he opened the works with a request: “I wanted you to answer the following question: Why do you do theatre?

I close my speech here. With the memory of that question. Thank you very much for your attention. 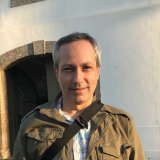